Please join the Pourdavoud Center for the Study of the Iranian World for a lecture by Professor Gil Stein. Achaemenids or Persians?  Burials, Material Culture, and Imperial Identities in the Euphrates Valley (5th-4th centuries BCE) The Achaemenid empire was the largest empire in the world in the 5th-4th centuries BCE, encompassing numerous polities and cultural…

Please join the Iranian Studies Program for a lecture by Dr. Robert Steele. Ancient Persia in Pahlavi Politics: The Imperial Celebrations of 1971 and Cultural Policy under the Shah In October 1971, heads of state, political and cultural figures, business leaders, and journalists from around the world came to Persepolis at the invitation of Shah…

Please join the Iranian Studies Program at UCLA for a Bilingual Lecture Series film screening of Case No. I, Case No. 2. The film and following Q&A with Ahmad Kiarostami will be in Persian.

Some major landmarks of modern Iranian history such as the 1921 coup d’Etat or the toppling of Mosaddeq in 1953 are now checked with critical attention by historians. Was the 1953 coup against Mosaddeq an American achievement or did it eventually succeed through a popular uprising? If the Shiite clergy would be responsible for the… 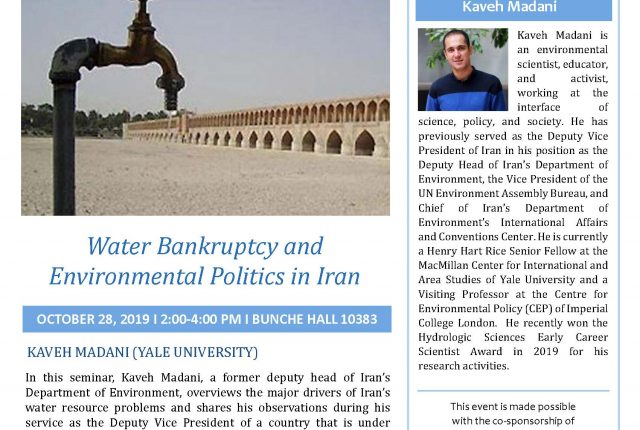 Please join UCLA Iranian Studies for the first Bilingual Lecture Series talks of the year.  Dr. Kaveh Madani will present his research on Monday, October 28 at 2:00pm in Bunch Hall 10383. This lecture will be in English.

Please join UCLA Iranian Studies for the first Bilingual Lecture Series talk of the year.  Dr. Kaveh Madani will present his research on Sunday, October 27, 2019 in Dodd Hall 78 at 4:00pm. This lecture will be in Persian.  His English lecture will follow on Monday, October 28 at 2:00pm in Bunch Hall 10383.