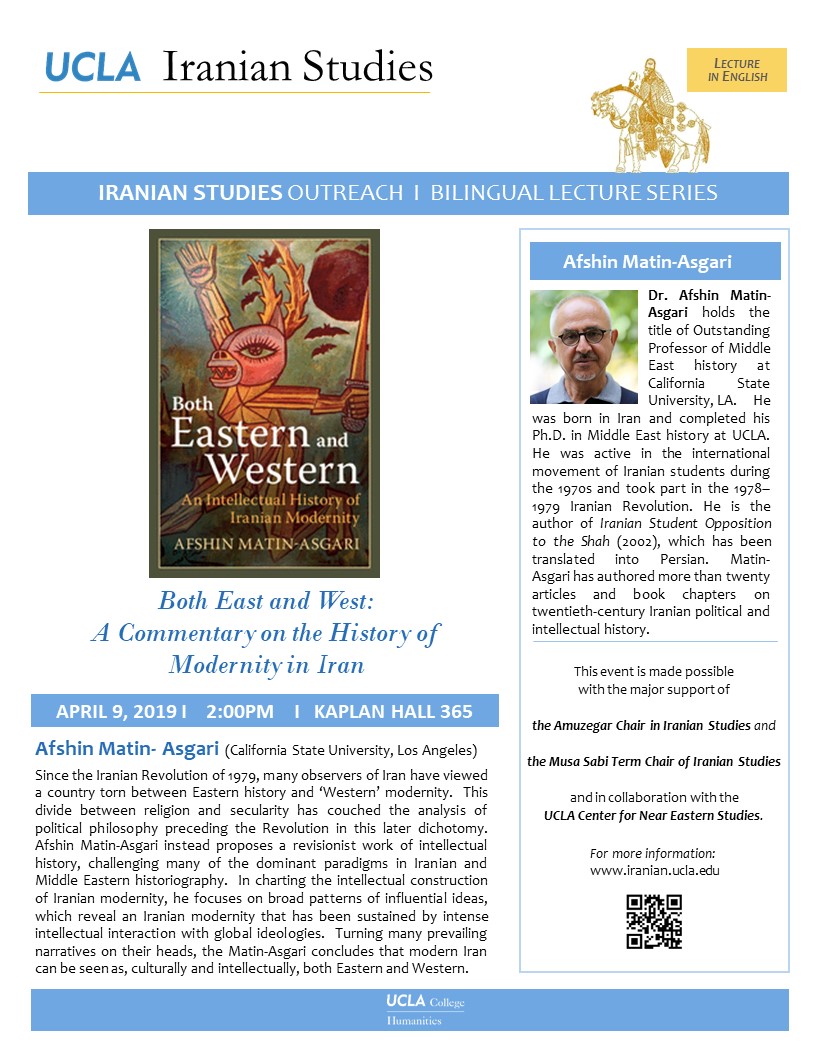 Please join UCLA Iranian Studies for Dr. Afshin Matin-Asgari’s second lecture of the 2018-2019 academic year. He will present research from his latest book on April 9, 2019 in Kaplan Hall 365 (former Humanities Building) at 2:00pm.

Both East and West:

A Commentary on the History of Modernity in Iran

Since the Iranian Revolution of 1979, many observers of Iran have viewed a country torn between Eastern history and ‘Western’ modernity.  This divide between religion and secularity has couched the analysis of political philosophy preceding the Revolution in this later dichotomy.  Afshin Matin-Asgari instead proposes a revisionist work of intellectual history, challenging many of the dominant paradigms in Iranian and Middle Eastern historiography.  In charting the intellectual construction of Iranian modernity, he focuses on broad patterns of influential ideas, which reveal an Iranian modernity that has been sustained by intense intellectual interaction with global ideologies.  Turning many prevailing narratives on their heads, the Matin-Asgari concludes that modern Iran can be seen as, culturally and intellectually, both Eastern and Western.

Dr. Afshin Matin-Asgari holds the title of Outstanding Professor of Middle East history at California State University, LA.  He was born in Iran and completed his Ph.D. in Middle East history at UCLA. He was active in the international movement of Iranian students during the 1970s and took part in the 1978–1979 Iranian Revolution. He is the author of Iranian Student Opposition to the Shah (2002), which has been translated into Persian. Matin-Asgari has authored more than twenty articles and book chapters on twentieth-century Iranian political and intellectual history.