A Romano-Egyptian Obelisk Beyond the Nile 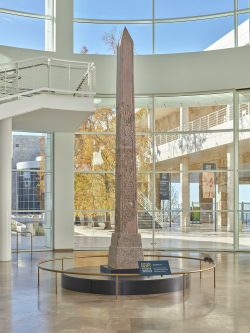 Using a Romano-Egyptian obelisk from the collection of the Museo del Sannio in Benevento, Italy as a case study, this talk will overview the major themes of the current Getty exhibition “Beyond the Nile: Egypt and the Classical World.” This exhibition explores cross-cultural interactions between Egypt, Greece, and Rome from about 2000 BC until about AD 300. Part of a new Getty initiative called The Classical World in Context, the exhibition kicks off a series that will highlight the Classical world’s relationships with other ancient cultures. The themes encapsulated in the obelisk – an Egyptian monument made during the reign of emperor Domitian and set up at a temple to Isis in Benevento – will be connected to other objects in the exhibition, demonstrating that many of the underlying motivations for contact remained the same over the course of nearly 2500 years.

Sara E. Cole is an Assistant Curator in the Antiquities Department at the Getty Villa. She received her PhD from Yale University in 2015. Her research focuses primarily on cross-cultural exchange in Graeco-Roman Egypt and she is a co-curator of the Getty exhibition “Beyond the Nile: Egypt and the Classical World.” Prior to joining the Getty, she curated the exhibitions “Glass of the Ancient Mediterranean” (McClung Museum of Natural History and Culture, Knoxville, TN, 2014) and “Drink That You May Live: Ancient Glass from the Yale University Art Gallery” (Yale University Art Gallery, New Haven, CT, 2017).