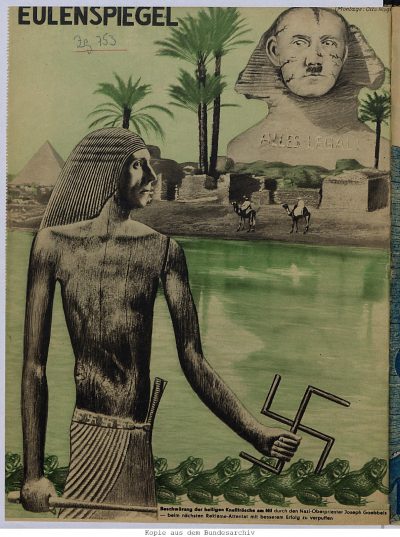 The history of Egyptology in the Third Reich has long been tabooed and never been the subject of academic analysis. Based on extensive archival research in Germany, this lecture will provide an overview of the discipline under National Socialism. It will look at the careers of individual scholars, from the emigrants and those persecuted to scholars who served in the SA, SS and Waffen-SS, and who themselves as “political leaders” for the new regime. Attempts to align Egyptology, a discipline studying a “non-Aryan” civilization, with Nazi ideas occurred early on; in addition, the German Archaeological Institute in Egypt played an important role in Nazi propaganda in the Middle East. The discipline’s history in Nazi Germany was also of decisive significance for the post-war development of Egyptology in the United States. More fundamentally, the history of academe since the Weimar Republic is an example of the diverse dispositions of scholarship to political pressure and the fragility of tenets of academic integrity.

Thomas Schneider is Professor of Egyptology and Near Eastern Studies at the University of British Columbia, Vancouver. He studied at Zurich, Basel, and Paris, earning a Master’s degree (Lizentiat), a doctorate, and a habilitation in Egyptology at the University of Basel. He has published widely in his main areas of research: Egyptian interconnections with the Levant and the Near East (including Egypt and the Bible), Egyptian history and chronology, Egyptian historical phonology, and the history of Egyptology in Nazi Germany. He is founding editor of the Journal of Egyptian History, as well as editor of Near Eastern Archaeology for the American Schools of Oriental Research.