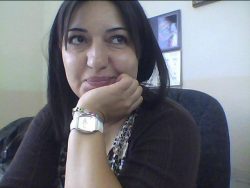 The presentation discusses the emergence of theater among Ottoman Armenians in the 19th century in the context of modernization and national awakening and the role Armenian actresses had in the development and popularization of the art. Theater played the dual role of reflecting and serving as an agent of sociocultural and political shifts. Largely concentrating on Azniv Hrachia’s memoirs, Dr. Khalapyan illustrates how the stage allowed women to participate in forming public opinion on a new national identity, in the process breaking the gender and “cultural” norms of womanhood established in Armenian society.

Dr. Hasmik Khalapyan is a lecturer at the American University of Armenia. She is Academic Director of the AGBU Armenian Virtual College and Editorial Director of the Virtual College’s Multimedia E-Book Series. She has an MA from Miami University, and a PhD in History from Central European University, Budapest, Hungary. She has carried out research in Ottoman history in archives and libraries in Armenia, Austria, France and Turkey. Her research interests include: concepts and histories of social change in a local/global perspective; Ottoman history; women’s movements worldwide in a comparative perspective; theories and histories of empire and colonialism; gender and international law. She has been published in international journals and edited volumes in English, and has been translated into Turkish.