Please join the Pourdavoud Center for the Study of the Iranian World for a lecture by Professor Gil Stein.

The Achaemenid empire was the largest empire in the world in the 5th-4th centuries BCE, encompassing numerous polities and cultural groups within its 20 satrapies. To rule this enormous empire, the Persian elites had to gain the active support of the people they governed to get them to participate in the administrative and military apparatus of the Achaemenid state. How did this actually work in practice? This lecture examines two enigmatic Persian-period burials at the site of Hacınebi, on the Euphrates River crossing at Zeugma/Apamea, to investigate the relationship between material culture and social identity in the multi-ethnic empire. Achaemenid material culture was an imperial synthesis that combined stylistic elements from Scythia, Mesopotamia, Egypt, and other regions; as a result, it is very difficult to identify the ethnicity of any person in a burial based only on the style of specific objects. Taken together, textual, artistic, and archaeological data on burial practices, military organization, and material culture styles at Hacınebi highlight and help us to understand the complex hybrid identities and shared cultural koine that linked Persian and non-Persian elites across the cosmopolitan Achaemenid empire.

Gil Stein is Professor of Near Eastern Archaeology at the Oriental Institute of the University of Chicago and Director of the Chicago Center for Cultural Heritage Preservation. From 2002 to 2017 he served as Director of the Oriental Institute. He received his BA in Archaeology from Yale University and his PhD in Anthropology from the University of Pennsylvania. His research investigates ancient economies, the archaeology of colonialism, inter-regional interaction, the development of the earliest cities and states in the Near East, zooarchaeology, and the preservation of cultural heritage. He has directed excavations at the Uruk period Mesopotamian trading colony of Hacınebi in Turkey, at Halaf and Ubaid period site of Tell Zeidan in Syria, and is currently excavating at the 7000 year old town of Surezha in the Kurdistan region of Northeast Iraq. 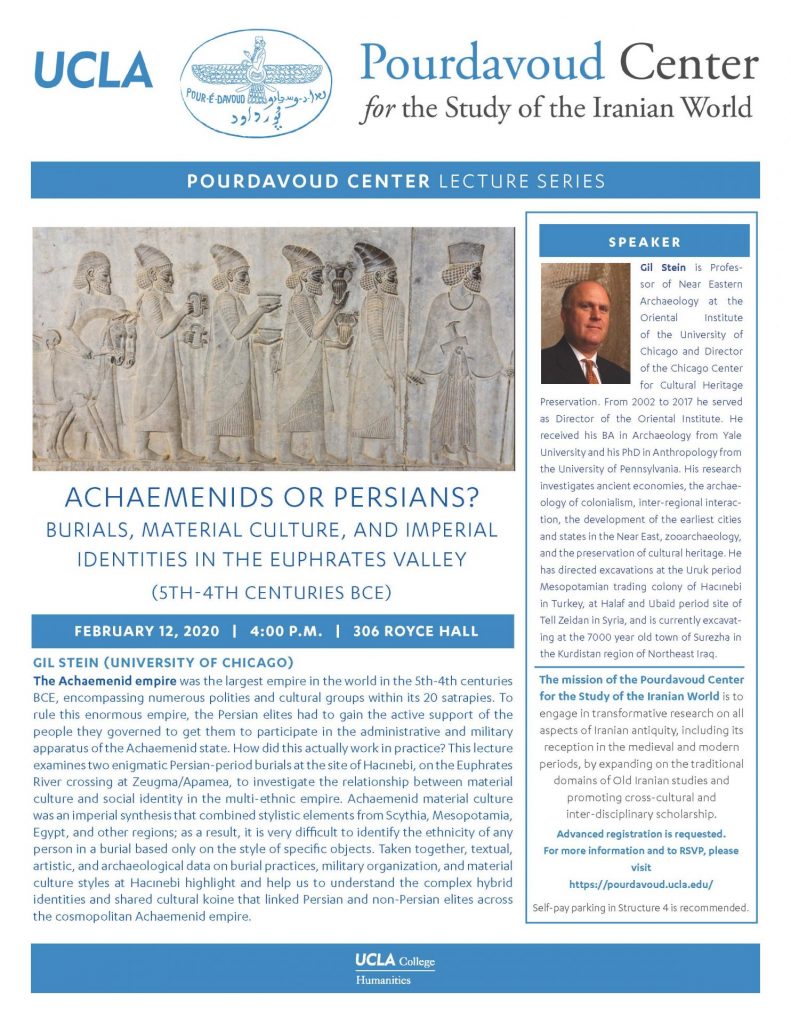