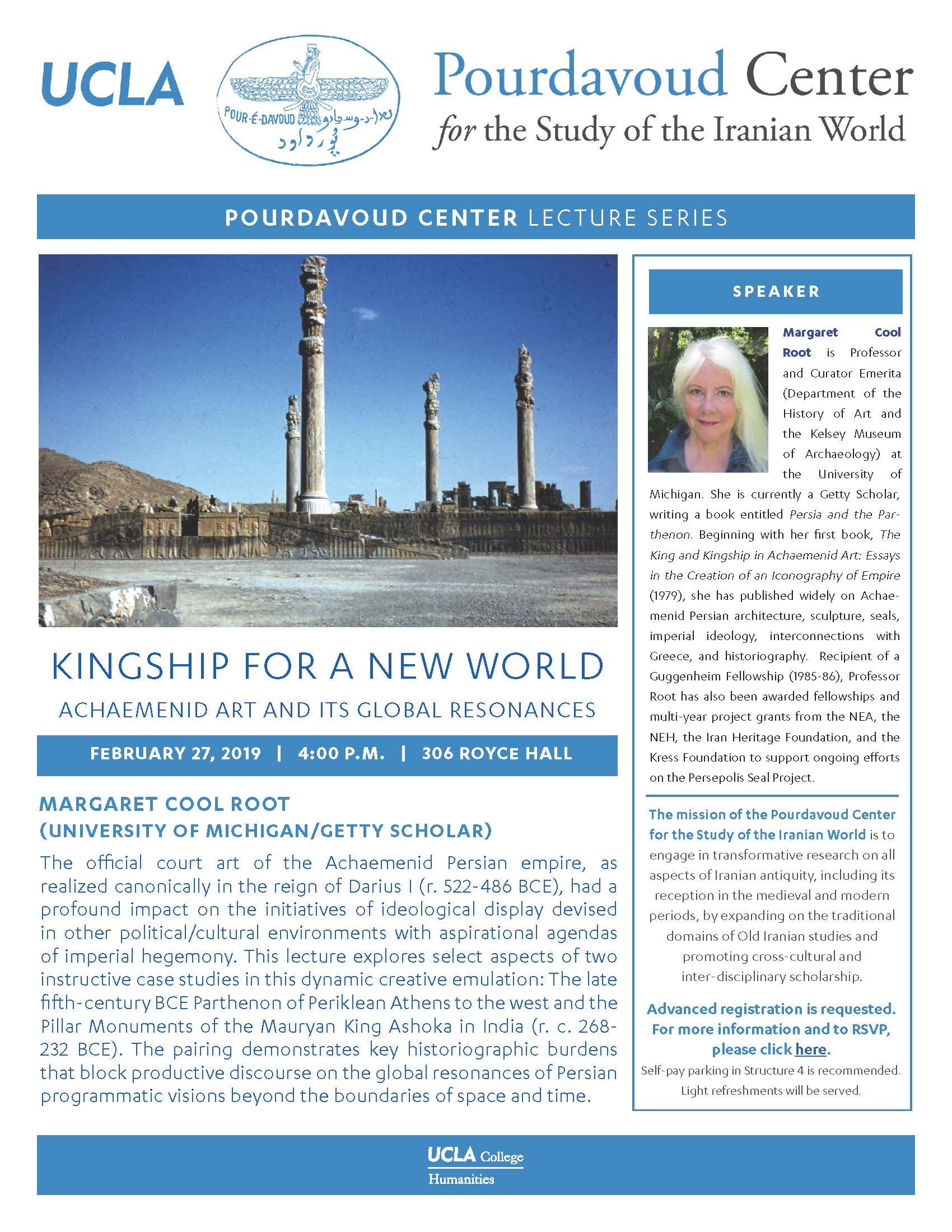 The Pourdavoud Center for the Study of the Iranian World announces the lecture of Dr. Margaret Root as part of the 2018-2019 Lecture Series.  Dr. Root is Professor and Curator Emerita of Near Eastern and Classical Art and Archaeology at the University of Michigan, Ann Arbor and a 2018-2019 Getty Scholar.

Kingship for a New World: Achaemenid Art and its Global Resonances

The official court art of the Achaemenid Persian empire, as realized canonically in the reign of Darius I (r. 522-486 BCE), had a profound impact on the initiatives of ideological display devised in other political/cultural environments with aspirational agendas of imperial hegemony. This lecture explores select aspects of two instructive case studies in this dynamic creative emulation: The late fifth-century BCE Parthenon of Periklean Athens to the west and the Pillar Monuments of the Mauryan King Ashoka in India (r. c. 268-232 BCE). The pairing demonstrates key historiographic burdens that block productive discourse on the global resonances of Persian programmatic visions beyond the boundaries of space and time.

Margaret Cool Root is Professor and Curator Emerita (Department of the History of Art and the Kelsey Museum of Archaeology) at the University of Michigan. She is currently a Getty Scholar, writing a book entitled Persia and the Parthenon. Beginning with her first book, The King and Kingship in Achaemenid Art: Essays in the Creation of an Iconography of Empire (1979), she has published widely on Achaemenid Persian architecture, sculpture, seals, imperial ideology, interconnections with Greece, and historiography. Recipient of a Guggenheim Fellowship (1985-86), Professor Root has also been awarded fellowships and multi-year project grants from the NEA, the NEH, the Iran Heritage Foundation, and the Kress Foundation to support ongoing efforts on the Persepolis Seal Project.