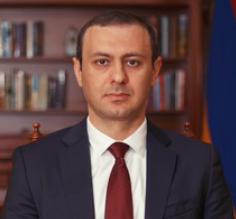 Armen Grigoryan, Secretary of the Security Council in the Republic of Armenia, gained his BA in International Relations from Yerevan State University and MA in the same field from the American University of Armenia. Since then he has participated in various international educational projects inter aliain the USA, Finland, and Italy. Recently, he served concurrently as Visiting Lecturer in World Politics and International Relations at the Armenian-Russian (Slavonic) University and as Project Coordinator of Electoral Programs at the Transparency International Anti-Corruption Center (2015-2018). On May of last year he was appointed to his current post by Prime Minister Nikol Pashinyan.

Discussion will focus on the interrelationship between democratization, civil society, economic and political developments, and national security in Armenia. Considering the geopolitical dynamics of the region and recent internal political developments after the Velvet Revolution , the Secretary will explain the very specific nature of his office and its responsibilities, even as the country moves toward democratic, responsible, responsive, and inclusive governance for the first time since gaining independence in 1991.