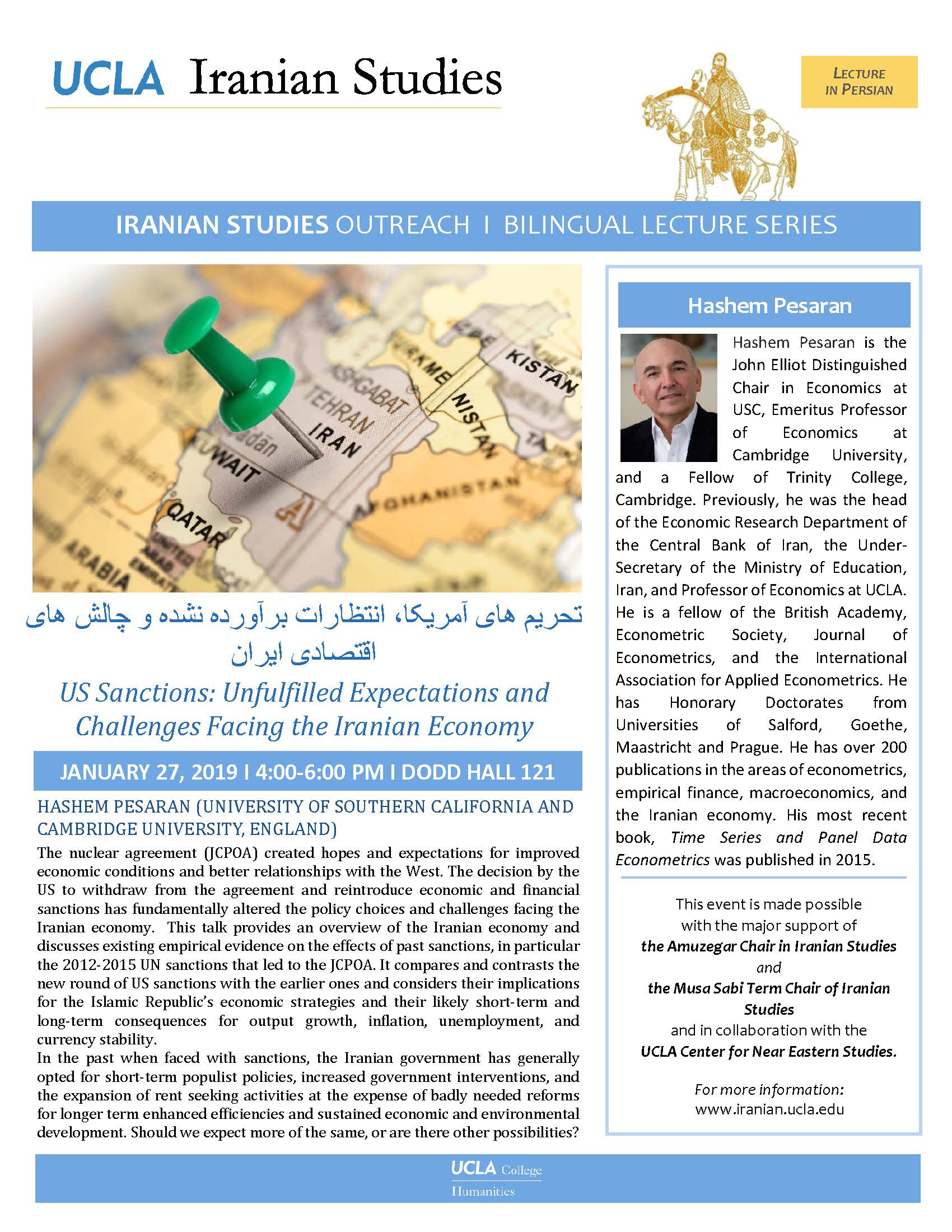 Please join the UCLA Iranian Studies Outreach Program for their Bilingual Lecture Series.  Dr. Hashem Pesaran will present his research in Kaplan Hall (former Humanities Building) on January 27, 2019 at 4:00pm.  This lecture will be in Persian.  Please see the attached flyer for details.

US Sanctions: Unfulfilled Expectations and Challenges Facing the Iranian Economy

The nuclear agreement (JCPOA) created hopes and expectations for improved economic conditions and better relationships with the West. The decision by the US to withdraw from the agreement and reintroduce economic and financial sanctions has fundamentally altered the policy choices and challenges facing the Iranian economy.  This talk provides an overview of the Iranian economy and discusses existing empirical evidence on the effects of past sanctions, in particular the 2012-2015 UN sanctions that led to the JCPOA. It compares and contrasts the new round of US sanctions with the earlier ones and considers their implications for the Islamic Republic’s economic strategies and their likely short-term and long-term consequences for output growth, inflation, unemployment, and currency stability.

In the past when faced with sanctions, the Iranian government has generally opted for short-term populist policies, increased government interventions, and the expansion of rent seeking activities at the expense of badly needed reforms for longer term enhanced efficiencies and sustained economic and environmental development. Should we expect more of the same, or are there other possibilities?

Hashem Pesaran is the John Elliot Distinguished Chair in Economics at USC, Emeritus Professor of Economics at Cambridge University, and a Fellow of Trinity College, Cambridge. Previously, he was the head of the Economic Research Department of the Central Bank of Iran, the Under-Secretary of the Ministry of Education, Iran, and Professor of Economics at UCLA. He is a fellow of the British Academy, Econometric Society, Journal of Econometrics, and the International Association for Applied Econometrics. He has Honorary Doctorates from Universities of Salford, Goethe, Maastricht and Prague. He has over 200 publications in the areas of econometrics, empirical finance, macroeconomics, and the Iranian economy. His most recent book, Time Series and Panel Data Econometrics was published in 2015.