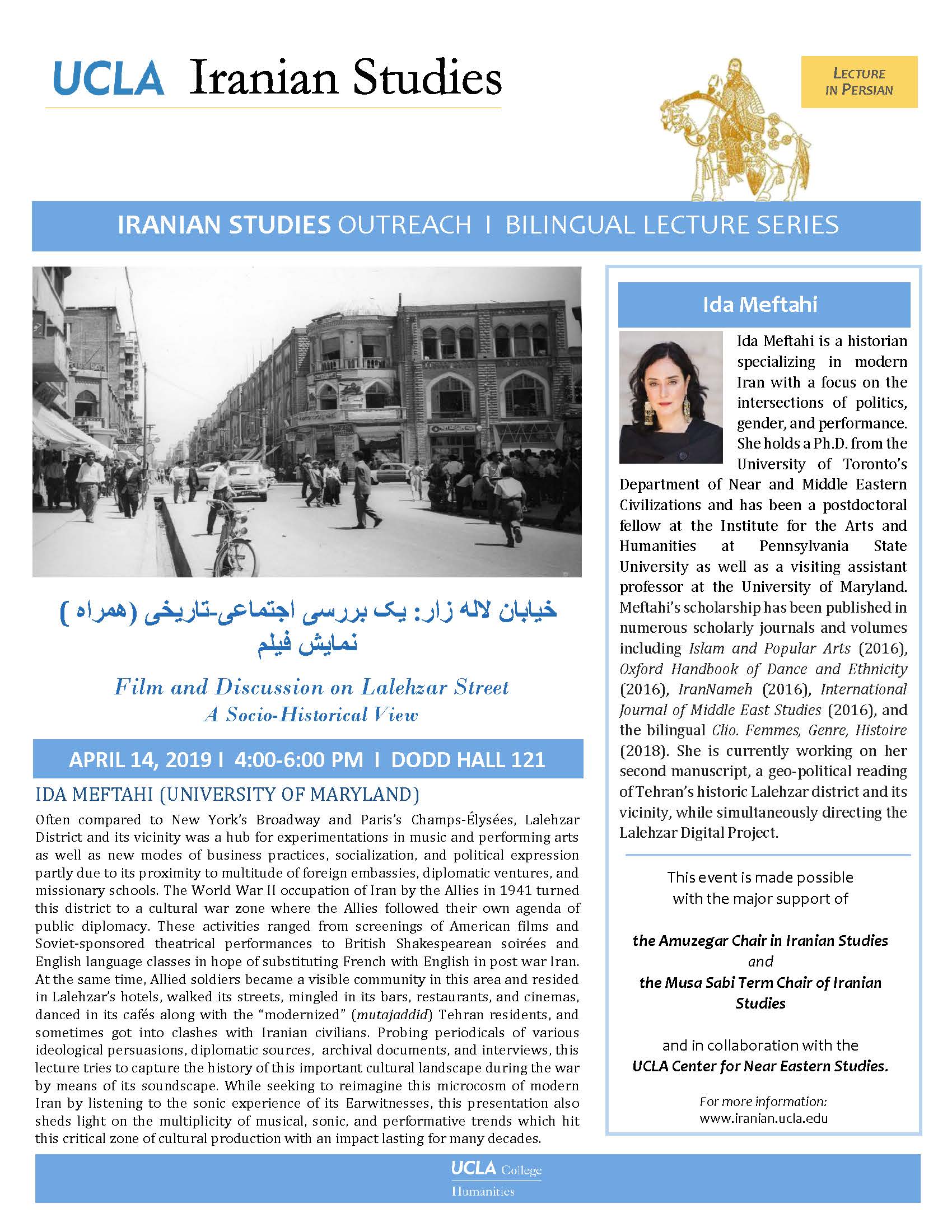 Film and Discussion on Lalehzar Street

Often compared to New York’s Broadway and Paris’s Champs-Élysées, Lalehzar District and its vicinity was a hub for experimentations in music and performing arts as well as new modes of business practices, socialization, and political expression partly due to its proximity to multitude of foreign embassies, diplomatic ventures, and missionary schools. The World War II occupation of Iran by the Allies in 1941 turned this district to a cultural war zone where the Allies followed their own agenda of public diplomacy. These activities ranged from screenings of American films and Soviet-sponsored theatrical performances to British Shakespearean soirées and English language classes in hope of substituting French with English in post war Iran. At the same time, Allied soldiers became a visible community in this area and resided in Lalehzar’s hotels, walked its streets, mingled in its bars, restaurants, and cinemas, danced in its cafés along with the “modernized” (mutajaddid) Tehran residents, and sometimes got into clashes with Iranian civilians. Probing periodicals of various ideological persuasions, diplomatic sources,  archival documents, and interviews, this lecture tries to capture the history of this important cultural landscape during the war by means of its soundscape. While seeking to reimagine this microcosm of modern Iran by listening to the sonic experience of its Earwitnesses, this presentation also sheds light on the multiplicity of musical, sonic, and performative trends which hit this critical zone of cultural production with an impact lasting for many decades.

Ida Meftahi is a historian specializing in modern Iran with a focus on the intersections of politics, gender, and performance.  She holds a Ph.D. from the University of Toronto’s Department of Near and Middle Eastern Civilizations and has been a postdoctoral fellow at the Institute for the Arts and Humanities at Pennsylvania State University as well as a visiting assistant professor at the University of Maryland.  Meftahi’s scholarship has been published in numerous scholarly journals and volumes including Islam and Popular Arts (2016), Oxford Handbook of Dance and Ethnicity (2016), IranNameh (2016), International Journal of Middle East Studies (2016), and the bilingual Clio. Femmes, Genre, Histoire (2018). She is currently working on her second manuscript, a geo-political reading of Tehran’s historic Lalehzar district and its vicinity, while simultaneously directing the Lalehzar Digital Project.