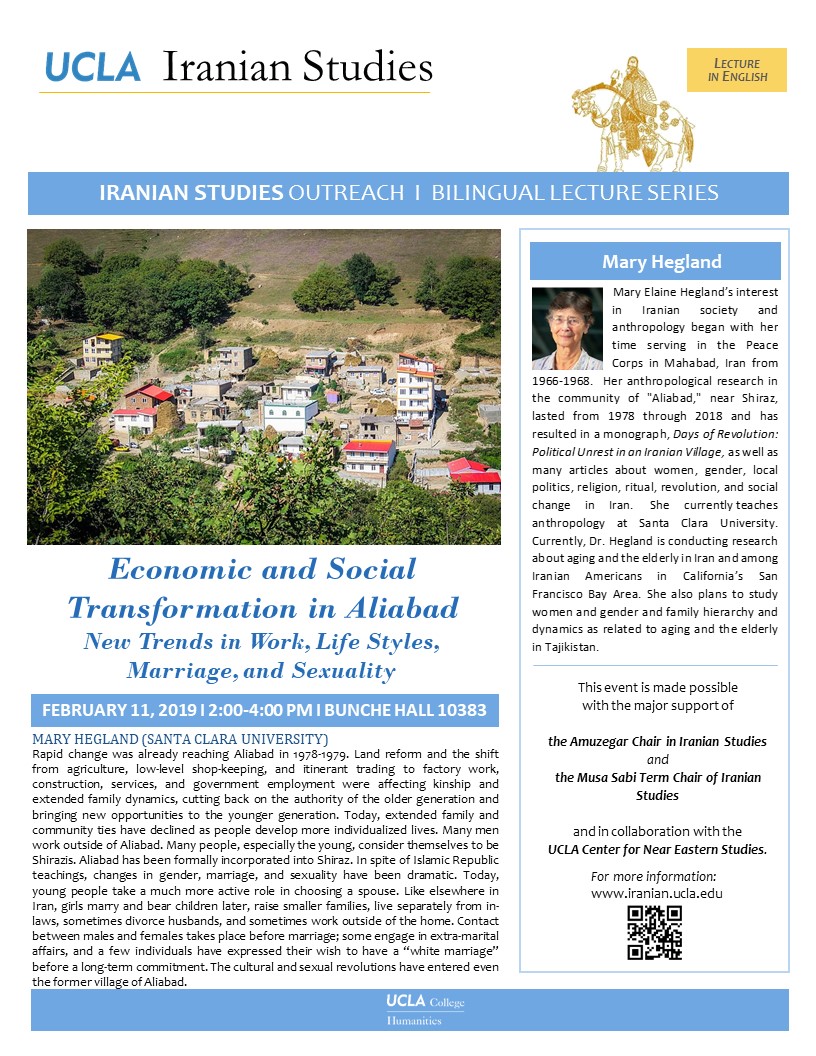 Please join the UCLA Iranian Studies Outreach Program for their Bilingual Lecture Series. Dr. Mary Helgand will present her research in Bunche Hall 10383 on February 11, 2019 at 2:00pm. This lecture will be in English. Please see the attached flyer for details.

Rapid change was already reaching Aliabad in 1978-1979. Land reform and the shift from agriculture, low-level shop-keeping, and itinerant trading to factory work, construction, services, and government employment were affecting kinship and extended family dynamics, cutting back on the authority of the older generation and bringing new opportunities to the younger generation. Today, extended family and community ties have declined as people develop more individualized lives. Many men work outside of Aliabad. Many people, especially the young, consider themselves to be Shirazis. Aliabad has been formally incorporated into Shiraz. In spite of Islamic Republic teachings, changes in gender, marriage, and sexuality have been dramatic. Today, young people take a much more active role in choosing a spouse. Like elsewhere in Iran, girls marry and bear children later, raise smaller families, live separately from in-laws, sometimes divorce husbands, and sometimes work outside of the home. Contact between males and females takes place before marriage; some engage in extra-marital affairs, and a few individuals have expressed their wish to have a “white marriage” before a long-term commitment. The cultural and sexual revolutions have entered even the former village of Aliabad.

Mary Elaine Hegland’s interest in Iranian society and anthropology began with her time serving in the Peace Corps in Mahabad, Iran from 1966-1968.  Her anthropological research in the community of “Aliabad,” near Shiraz, lasted from 1978 through 2018 and has resulted in a monograph, Days of Revolution: Political Unrest in an Iranian Village, as well as many articles about women, gender, local politics, religion, ritual, revolution, and social change in Iran.  She currently teaches anthropology at Santa Clara University. Currently, Dr. Hegland is conducting research about aging and the elderly in Iran and among Iranian Americans in California’s San Francisco Bay Area. She also plans to study women and gender and family hierarchy and dynamics as related to aging and the elderly in Tajikistan.