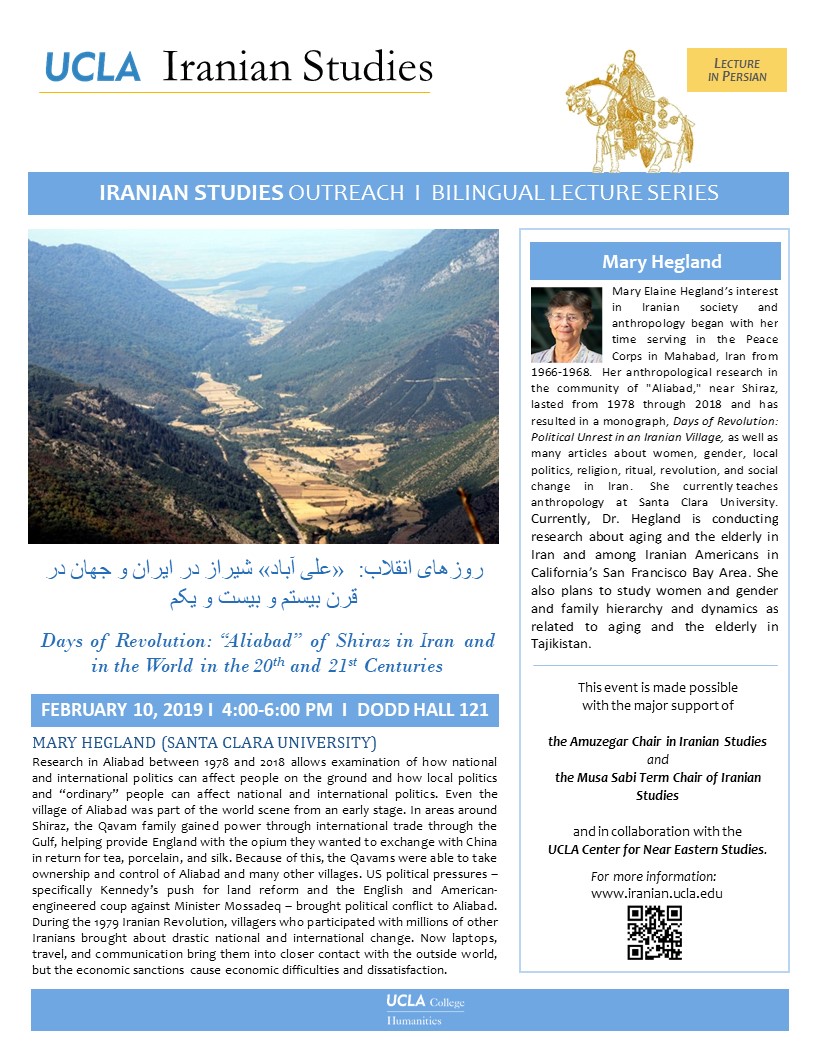 Please join the UCLA Iranian Studies Outreach Program for their Bilingual Lecture Series. Dr. Mary Helgand will present her research in Dodd Hall 121 on February 10, 2019 at 4:00pm. This lecture will be in Persian. Please see the attached flyer for details.

Days of Revolution: “Aliabad” of Shiraz in Iran and in the World in the 20th and 21st Centuries

Research in Aliabad between 1978 and 2018 allows examination of how national and international politics can affect people on the ground and how local politics and “ordinary” people can affect national and international politics. Even the village of Aliabad was part of the world scene from an early stage. In areas around Shiraz, the Qavam family gained power through international trade through the Gulf, helping provide England with the opium they wanted to exchange with China in return for tea, porcelain, and silk. Because of this, the Qavams were able to take ownership and control of Aliabad and many other villages. US political pressures – specifically Kennedy’s push for land reform and the English and American-engineered coup against Minister Mossadeq – brought political conflict to Aliabad. During the 1979 Iranian Revolution, villagers who participated with millions of other Iranians brought about drastic national and international change. Now laptops, travel, and communication bring them into closer contact with the outside world, but the economic sanctions cause economic difficulties and dissatisfaction.

Mary Elaine Hegland’s interest in Iranian society and anthropology began with her time serving in the Peace Corps in Mahabad, Iran from 1966-1968.  Her anthropological research in the community of “Aliabad,” near Shiraz, lasted from 1978 through 2018 and has resulted in a monograph, Days of Revolution: Political Unrest in an Iranian Village, as well as many articles about women, gender, local politics, religion, ritual, revolution, and social change in Iran.  She currently teaches anthropology at Santa Clara University. Currently, Dr. Hegland is conducting research about aging and the elderly in Iran and among Iranian Americans in California’s San Francisco Bay Area. She also plans to study women and gender and family hierarchy and dynamics as related to aging and the elderly in Tajikistan.