Unscripted: The Visuality of Monumental Script in Ptolemaic Egypt 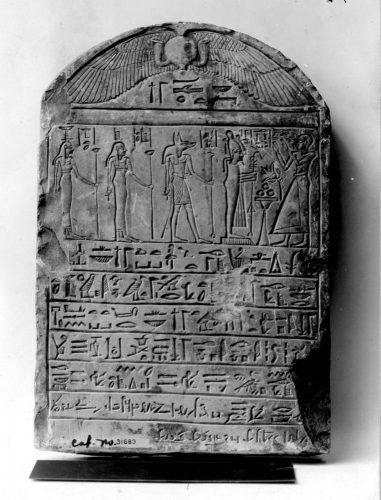 The Egyptian language is visually associated with its iconic Hieroglyphs. However, by the Ptolemaic period (332-30 BCE), the later form of Egyptian known as Demotic, which employed a different script, was commonly used in daily life. Hieroglyphs retained a prominent position and could imbue an inscription with prestige, but the multicultural shift of the Egyptian population by this period led to modifications in the vocabulary of social presentation. At this time, individuals creating inscribed funerary objects began experimenting with the elements of personal display by producing multilingual monuments in Egyptian and Greek as well as transcribing older texts into the Demotic script.

Emily Cole is a Visiting Assistant Professor at the Institute for the Study of the Ancient World, New York University. She received her Ph.D. in Near Eastern Languages and Cultures from UCLA in 2015. Her research focuses on multiculturalism and communication practices in the Eastern Mediterranean during the 1st millennium BCE. Her new project, Beyond the Rosetta Stone, will incorporate several cases studies that examine how individuals manipulated the visual presentation of scripts in Ptolemaic and Roman Egypt. She has also participated in archaeological fieldwork in Turkey, Sudan, and Egypt, and is co-director of the “Qarah el-Hamra Fayum Project” with Bethany Simpson.