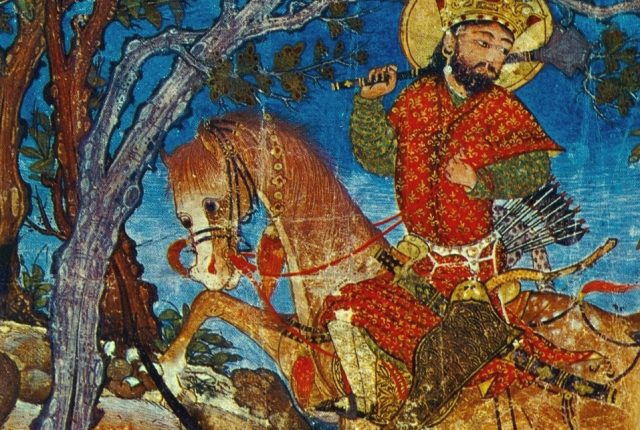 The UCLA Program of Iranian Studies would like to share a call for papers for a program of online events held by the University of California, Los Angeles, Department of Ethnomusicology, Summer 2020 – Winter 2021.

The sitar and setar are the foremost classical instruments of India and Iran. They are seen by most
people as being distinct instruments from different countries and traditions. However, they share
a common ancestry, and their name is in fact the same word (Persian, ستھا ر ). It was transliterated
into English in slightly different ways during colonial times. As we scratch just beneath the
deceptive surface of Indian and Iranian music, we find the rich confluence that is the Indo-Persian
world, a realm of connected histories and creativity, and a space to imagine new ones.

Indo-Persian studies emerged in the eighteenth century in the context of European colonialism
and has come to deal with a large area in Asia which Marshall Hudgson called the Persianate
world (Hudgson 1974). Indo-Persian cultural exchange dates back to antiquity. In ancient Persia,
legend has it that by the request of Bahram V (r.420–438), twelve thousand musicians were sent
from India to Iran, and there are still tribes of musicians in southwest Iran that believe they
immigrated from India. However, it was when Mahmud of Ghazni (r.999-1030) extended his
territories to India, introducing Persian language and Islam to the Indian subcontinent, that a
sustained period of rich cultural exchange began. The Indo-Persian territory at its zenith
extended to China, Eastern Europe, and Northern Africa. Cultural syncretism developed in these
vast areas not just through the official language and religion of the courts – Persian and Islam –
but through trade, wandering Sufis, Persian poetry, scholars, and musicians, engendering deep
and long-lasting connections.

In North India, this Indo-Persian confluence is evident in genres such as khyal and tarana, and in
the iconic classical instruments, the sitar and sarod. Raga was developed in new ways through
the connection of music, astrology and Unani medicine in Mughal India (Brown 2010), and
present-day tala is a hybrid of accentual and syllabic forms, likely emanating from the Indo-
Persian confluence (Clayton 2007). The influence of Persian language, poetry and scholarship in
Indian Sufism is immense, with, for example, many Persian texts included in the repertoire of
qawwali (Qureshi 1986). It is also apparent in shared poetic conventions which extend beyond
classical forms and into vernacular genres, with imagery, metaphors, and phrases shared between Persian and Indic songs. The Indo-Persian connection is manifested in the urban and classical music of Afghanistan, and musical cultures in various regions such as Baluchistan and Kashmir.

It is also important to note that having Persian as the common language for writing and
communication, scholars in Iran/Central Asia and India were able to read Persian books on the
two major traditions of Indian and Persian music. Through the original writings on Persian music
by immigrant scholars in India such as Seyf-Jām of Herat, Qāsim ibn Dust-Ali of Bukhara, and
Hossein Zahiri from Isfahan, Indian scholars were able to have direct encounters with Persian
music. Indian music was also able to make an impact back on music in Iran by such routes. For
example, the symbolic mode derivation in Persian texts, in which each of the six āvāz generated
two maqams, seems to be an influence of the Indian music system of six ragas which each had
five raginis.

Indo-Persian musical connections remained active into the early-to-mid twentieth century, when
Iranian musicians travelled to India and produced records. The Parsi community – Persian
Zoroastrians who had immigrated to India – maintained connections with Iran, and the first
Persian talkie movie, Dokhtar-e Lor, was produced in India by the Zoroastrian community. In
Afghanistan, Ustad Sarahang (1924–1983) studied music with Ashiq Ali Khan of India’s Patiala
gharana and became a legendary Afghan musician. In Iran, Indian musicians were invited by
individual patrons up till before the 1979 revolution, and as a part of the cosmopolitan Shiraz
Festival.

Historically, rulers patronized musicians and artists from across this region and syncretism
flourished. However, the era of nationalism ushered in a quite different perspective, one focused
on purity of tradition and a concern with what is ‘native’ to a place. While the Indo-Persian
confluence has given birth to and enriched north Indian art music, this history is downplayed in
India, and mythical origins in India’s ancient, pre-Islamic past are emphasized instead. In Iran,
the influence of Indo-Persian cultural exchange on music is admittedly less than in India, but it
has been little explored. New borders have divided India, Pakistan, Afghanistan, Tajikistan,
Uzbekistan, and Iran into highly separate zones, obscuring the wealth of connections of the past.
Nevertheless, in recent decades, new relationships between musicians have emerged in the form
of ‘world music’ and fusion projects. Most notably, two renowned musicians from Iran and
India, Kayhan Kalhor and Shujaat Hussein Khan, initiated a collaboration, Ghazal, that lasted for
two decades and resulted in a series of tours and albums over the past twenty years. In India, the
emergence of Sufi music as a craze amongst upper middle-class urbanites has also framed these
traditions in new ways (Manuel 2008).

Although the rich musical connections between South, West, and Central Asia has been partially
obscured, a critical mass of scholarly attention to this history had emerged by the beginning of
this millennium. Regula Qureshi’s book on qawwali was a pioneering study of the
quintessentially Indo-Persian Sufi music of India and Pakistan (1986). Najma Perveen Ahmad
(1984), Allyn Miner (1993), Shahab Sarmadee (e.g. 2003), and Madhu Trivedi (2012) have all
undertaken groundbreaking scholarship on Indian music from Persian texts, and Katherine
Brown/Schofield’s works on Mughal India have been particularly transformative of our
understanding of the Indo-Persian history of Hindustani music (e.g. 2010). Dilorom Karomat
(2006) and Mohsen Mohammadi (2006) have published on musical connections between India and Iran/Central Asia, and John Baily (1988) and Assadullah Shour (2011) have produced
important works on the Indo-Persian synergy of music in Afghanistan. The growing prominence
of the topic was marked in India in 2005 when the ITC Sangeet Research Academy in India, in
collaboration with several other institutions including UNESCU’s International Council for
Traditional Music and the University of Amsterdam, held an international symposium in
Mumbai titled ‘India-Iran: Confluence of Musical Cultures’. Proceedings of this conference were
published in a special issue of the Journal of the Indian Musicological Society (V 36/37, 2005-
2006).

This program of events aims to give a new prominence to the myriad dimensions of Indo-Persian
musical exchange, and to examine its contemporary legacy in countries across this region. It
seeks to bring together scholars from various disciplines working on musical cultures of India,
Central Asia, and Iran, and to enhance collaborations and comparative research. It also aims to
promote new musical relationships and associations. We encourage senior and junior academics
and musicians, as well as independent scholars and artists, to submit proposals for individual
papers, organized panels, performances, workshops, films, and poster presentations that relate
musical culture in the Indian subcontinent to Central Asia and Iran.

Deadline for submissions is August 31, 2020 (We may accommodate proposals that arrive
after the deadline if possible)

Abstracts for submissions should be no longer than 250 words and should be sent to
mohammadim@hotmail.com by August 31, 2020. (We may accommodate proposals that arrive
after the deadline if possible). Notification of acceptance to the conference will be sent in
September 2020. For questions related to the conference please contact Mohsen Mohammadi at
mohammadim@hotmail.com

English language must be used.