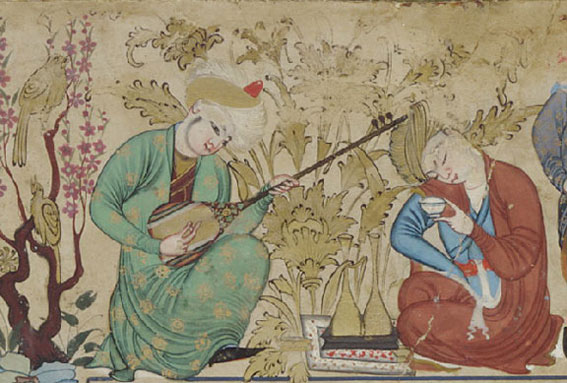 This class focuses on the performance of Persian classical music including the radif and tasnifs (vocal repertoire). This is a group class where students sit in a circle and begin learning a gushe (short melody-type) or a vocal composition of a designated dastgāh (multi-sectional modal structure) phrase by phrase through imitating and memorizing. In each quarter we chose one particular dastgāh and try to study major gushes and four vocal compositions in that modal structure.

Students can also study the setār and tār in individual basis. Beginning with basic instructions, we gradually develop performance techniques and work on the classical repertoire known as the radif as well as compositional genres. The class is taught in an oral-aural manner and attempts will be made to emphasize the indigenous terminology, mnemonic devices and musical concepts used in traditional context. Those who have already studied the santur, nay, kamāncheh, ‘ud, qānun and violin can also enroll in this class.

Amir Pourjavady studied the setar, vocal music, and the radif (classical repertoire) of Persian music with Dariush Safvat, Hossein Alizadeh, Dariush Talai and Hatam Asgari for more than ten years. He has recorded the album Six Songs from the Qajar Period and has performed with many of the most influential musicians in Iran, Europe and United States. He received a Ph.D. in Near Eastern Languages and Cultures from UCLA; an M.A. in Ethnomusicology from CUNY Graduate Center; and a B.A. in Music from the University of Tehran. He has published extensively on the history, theory and performance practice of music in the Middle East and Central Asia.