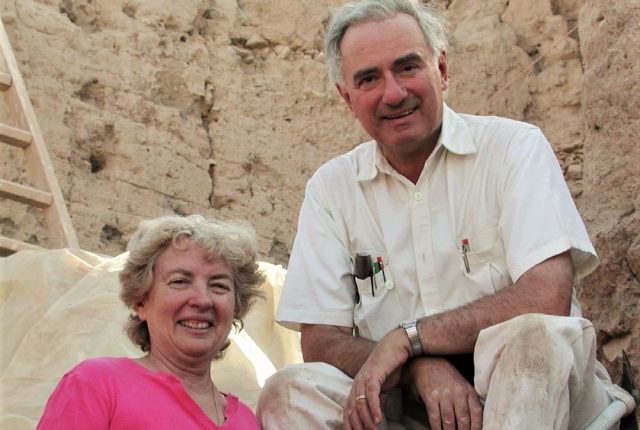 The Department of Near Eastern Languages and Cultures is thrilled to announce that our own Dr. Giorgio Buccellati and Dr. Marilyn Kelly Buccellati of the UCLA Cotsen Institute of Archaeology have been awarded the 2021 Balzan Prize for Art and Archaeology of the Ancient Near East for “their achievement in the study of Hurrian culture and for highlighting its importance as the foundation of a great urban civilization, among the most flourishing in the ancient Near East in the third millennium BCE; for enhancing theoretical reflection on the nature of its discipline.” They will receive their award on July 1st in Bern, Switzerland along with a prize of 750,000 CHF (approximately 815,000 USD) towards research.

The Bucellatis have worked together for over five decades in the Near East with countless discoveries, notably of “a temple, a vast fortification system, and a few neighborhoods of private dwellings” in the city of Terqa, and “clay seals, a palace, a temple, an open square, and an underground structure for religious rituals” in Tell Mozan revealing a sophisticated and important Hurrian civilization previously thought to be underdeveloped.

However, the Buccelattis work is not exclusively concerned with excavation, but also with preservation. Once the war in Syria began, the Buccelattis have been involved in the Urkesh Extended Project, the mission of which is to “actively preserve” the Tell Mozan site. Giorgio Buccelatti developed a new way to protect the walls of the site by using “protective covers on a scaffolding of steel piping that display the form of the mudbrick walls, and yet are low-cost, renewable, and constructed by skilled local workmen in local workshops.” The Buccelatis have actively involved “local populations, via widespread cultural education and participation in conservation work, extended to younger generation.” Their extensive work on this project earned them recognition and awards from the Archaeological Institute of America, the Chinese Academy of Social Science and the European Union.

More information about Dr.Giorgio Buccellati and Dr. Marilyn Kelly-Buccellati’s success and the prestigious award can be found here.