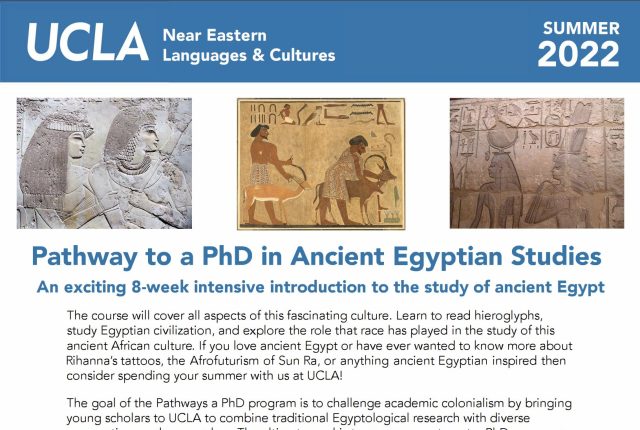 Courtesy of the course flyer

To increase inclusivity within the field of Egyptology, the Near Eastern Languages and Cultures department at UCLA is collaborating with Howard University to offer a pipeline program for Black students.

“Summer Research Internship and Pathway to PhD’s in Ancient Egyptian, North African, and Western Asian Studies” is an eight-week course that will start this summer. In it, four to five students from historically Black colleges and universities will be brought to UCLA to learn about the field of study while also receiving mentorship and support from faculty which will extend beyond the program.

Kara Cooney, a professor of Egyptian Art and Architecture and chair of the Department of Near Eastern Language and Cultures at UCLA and Jonathan Winnerman, academic administrator for Ancient Studies, looked critically at the field before submitting their application for this initiative back in early winter 2020.

“I feel lucky to be supported by the humanities division as well as the University of California Office of the President,” said Winnerman. “We had all the right people in the right place at once and wanted to make a change.”

Participants in the program will receive several benefits aside from mentorship and academic support, including a stipend of about $4,000, free enrollment in the course, free air transportation to Los Angeles, free room and board in UCLA’s student housing, and free trips around Los Angeles, including admission to any museums or special events.

The selection for the program will be led by Cooney, Winnerman, and Howard University’s Mario Beatty, associate professor of Afro-American Studies. Additionally, Solange Ashby, the president’s Postdoctoral Fellow in the department of Near Eastern Languages and Cultures, and RiTa Lucarelli, associate professor of Egyptology at UC Berkeley, will also take part in selecting students for the program. Cooney said they are primarily hoping to select individuals who will be able to work through the intensity of the program and also those who have the potential to devote themselves to the field of study.

“A small investment of time and money can make a huge change in a small field,” Cooney said. “If we can get that pipeline rolling, we can help students make a dent in American Egyptology and its representation.”

Cooney and Winnerman will also serve as the primary instructors of the course, and plan to bring Beatty to UCLA for one week during the program to co-teach and help mentor students.

Following the end of the program, Beatty will continue to support students on campus at Howard and other HBCUs.

Other notable faculty invited for the program include Willeke Wendrich, Catherine Bonesho, Asma Sayeed, William Schniedewind and other professors in the department of Near Eastern Languages and Cultures who have volunteered to give guest lectures on their areas of expertise and answer questions about graduate school in Near Eastern Studies. Several graduate students from the NELC have also volunteered themselves to meet with students in the program and accompany them on outings throughout Los Angeles.

Since the program will be offered in the summer, UCLA and other UC students can participate under the course code ANNEA 122, which will be offered during summer session A.

“This is not just a summer-long program, but an ongoing mentorship that will continue for years so that we work with these students, one-on-one, even after the program to help them with their research projects, and even with applications to graduate school,” Winnerman said. “So this isn’t a one and done kind of thing where we just abandon them but instead – mentor and follow throughout the process of preparing for grad school.”

For more information and to apply, please visit nelc.ucla.edu/pathwaytoaphd.