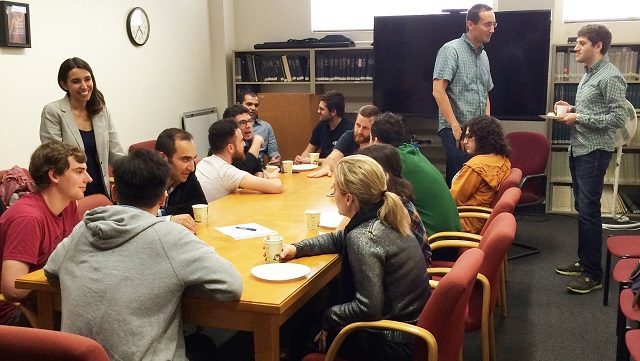 Responding to the national need for experts in Turkish language and culture, the course will enable students to access archival materials and conduct research.

The Turkish language is rarely taught in the United States. The federal government’s National Security Education Program, an initiative to build a broader and more qualified pool of U.S. citizens with foreign language and international skills, has designated Turkish as a critical language. Yet this year’s survey by the American Association of Teachers of Turkish revealed that only 408 students were enrolled in Turkish courses across the entire U.S. during the 2016-17 academic year.

With Turkey’s increasing role in the Middle East, an expanded pool of professionals who are fluent in the Turkish language and culture is crucial to our understanding of the region. To help meet this need, UCLA’s Turkish language instructor, Beyza Lorenz, will offer a new third-year Turkish course during the 2017-2018 academic year.

Students from a variety of disciplines including the departments of History, Near Eastern Languages and Cultures, Comparative Education, and Asian Languages and Cultures have enrolled for the course. They will develop skills to advance their careers by reading academic publications and newspapers in Turkish, accessing archival documents on the history of the Middle East, and conducting field research.

The course seeks to improve all four skills in the language: reading, speaking, writing, and listening. The course will be arranged around weekly themes. Students will read articles, watch videos, take part in classroom discussions, and complete writing assignments on each week’s theme. Throughout each quarter, students will prepare individual research projects using online and offline sources in Turkish. They will give formal project presentations at the end of the quarter.

A Mellon Foundation grant through UCLA’s International Institute provided seed funding for Lorenz to scope the demand for Turkish learning materials. Lorenz initiated an online survey in the 2015-16 academic year that captured responses from 30 instructors and 49 Turkish learners across the country. Some 55 percent of the students wanted to master Media Turkish, while 53 percent wanted to learn Turkish for reading; 86 percent wished they could talk about ideas such as politics and migration, and 55 percent wished they could write a story in Turkish.

To meet those needs, the new course will introduce students to the historical, political, cultural, and social debates that are key to understanding modern Turkey. Authentic texts, audio, video and multimedia materials will expose students to more complicated grammatical properties and idiomatic uses of the language. At the end of the course, the students will be able to conduct critical readings of articles written in journalistic and academic language, carry out intellectual conversations on complex ideas, write short essays using academic vocabulary, and distinguish between different types of formal and informal registers that come with the advanced use of the language.